Mojitos in the summertime…mmm…refreshing and invigorating.  In Beachbum Berry’s book Remixed (yeah – I really like what the man has offered the world), he made a rendition of the drink, calling it a Frohito.  I thoroughly enjoyed that drink, and appreciated the mint syrup aspect of it.  I have nothing against the Mojito, and will continue to drink them without reservation.  The Bum’s idea tasted almost the same, but smoother, friendlier, and since it’s frozen – slower going down (I normally drink Mojitos on the rocks).  I enjoy making flavored syrups, or if your prefer “infused simple syrups”, and like how a syrup can pack flavor in, while softening the flavor as well.  After trying the Frohito, I thought, “What about a lime syrup too?”  I also wanted a more Cuban style rum, as the last change to his recipe.

Making these syrups is more work than you may intend.  However, making syrups are just as rewarding as drinking them, at least in my opinion.  If you do not agree, there are mint syrups and lime syrups for purchase.  No big deal.  It might go without saying a homemade version will taste better, and the only preservative is vodka.  Something else to keep in mind, if you are making more drinks, and have no intension of storing these syrups (or any syrups), there is no need to add vodka, since its only use is preservation. 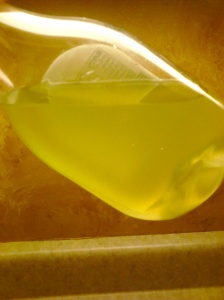 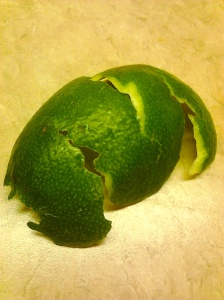 First, you need to set up the ingredients, then you can drink.  Peel the lime, since it is difficult after the lime is squeezed.  I know I said in the ingredients half a lime’s peal, and making it one piece.  I guess I live in Utopia, but try your best.  Sometimes pealing in a zig-zag pattern works…sometimes.  Regardless, two whole pieces are fine, or even three.  My point is not to grate the peal – keeping as solid of a surface area as possible.  Bring water and juice to a slow boil (slowly).  Add sugar and peal, and slow boil for 2 minutes, stirring constantly.  I may not understand this, but I rapid boiling might be too high of a temperature.  Take pan off heat, keep stirring until sugar dissolves.  Cover, let sit for 1 hour.  Uncover, remove peel, and let cool.  Strain through a fine-meshed sieve.  Bottle, adding a cap-full of vodka, gently stirring in to incorporate, or stir in the vodka before bottling – whichever is easiest.  Store in the refrigerator.  May keep up to 3 weeks.  As with all syrups, keep a close eye on them for any change. 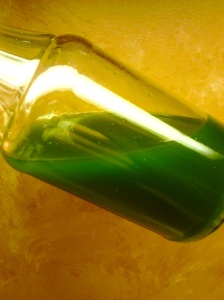 It’s so dark you can’t see light through it. Mmm…I can’t wait! 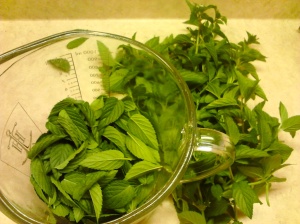 The most time-consuming part of making mint syrup.

Wash 2 bunches of mint in cold water, stripping leaves from stems, discard the stems.  Tightly pack leaves into an 8-ounce cup, empty into a pan filled half way with rapidly boiling water. 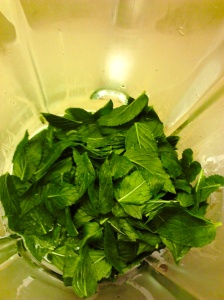 After 5 seconds or so, when the leaves wilt and vibrantly turn green, swiftly strain the leaves. 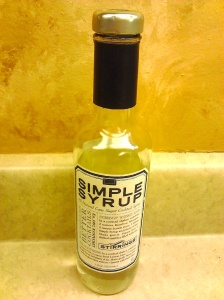 I bought one bottle at the store because it’s a good-sized bottle. Ever since I have made my own simple syrup, which is a huge savings for one, and better tasting.

Blend with 3 oz of simple syrup until completely liquified, scraping the insides of the blender to get every tidbit chewn. 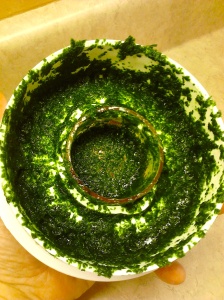 Don’t you hate when this happens?

With a fine-meshed sieve, strain by pressing down to get as much syrup possible.  Toss the solids. 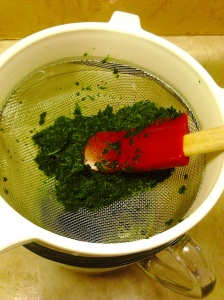 Seriously, try to get every drop

Stir in a cap-full of vodka, and bottle.  Store in the fridge.  You should get 3 ounces of lovely deep green mint syrup, and can drink off that for maybe 2 weeks.  But even with the preserving vodka, keep an eye on it.  Without vodka, it’d last only a few days (I got this recipe from Beachbum Berry, in his book Remixed.  Yet in the instructions to this, he said he adapted it from a 2003 recipe from one of Martha Stewart’s magazines.  When I searched for it to see how different, I found an updated recipe in Martha Stewart Living, May 2010, which looks closer to this.  I don’t want to get into trouble, nor from Mr. Berry for that matter).

{Okay, for clarification, yes, I said “chewn.” As in the verb “hewn” is the past participle of “hew”. I prefer not to say chewed. “Chewn” exists, but is not recognized, that is not by any other source than the Urban Dictionary. If I don’t agree with the spelling of a word, I change it in hopes it’ll catch on with popularity. After all, American English alters constantly according to what is commonly spoken. For example, I won’t ever pronounce it “wheelbarrow” – it’s always been a “wheelbarrel.”  To me at least, and understandably i might be the only one thinking this way: Chew is an irregular verb.} 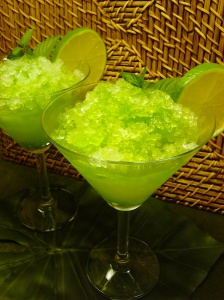 Especially after making infused syrups for a couple of hours, this tasted that much better.

As you can see, this recipe is for 2 glasses.  Making one is possible by halving the ingredients, yet is so much more friendly if including someone else you care about.  Understandably sweeter than the mojito you might be used to, this drink simply seems more refreshing, whether due to its smoothness from the shaved ice, or a trick played from not using citrus juice and raw vegetation.  When first trying this, I did not have the 1/2 oz of lime juice in the recipe.  My lovely wife, who normally, if not always, preferring sweeter drinks to mine even said she wanted a little more lime flavor, but no more lime syrup with how sweet it already was.  After stirring in a 1/4 oz of lime juice to each glass, it evened the score and made it a better drink.  If you’re slow-grilling for 3 hours, enjoying a hot weekend get-together, or imagining a trip to an island in the Spanish Caribbean, frappé some of these up and make your relationships stronger.  And something I should say with every alcoholic recipe – please drink responsibly.

It's all about our ridiculous love of booze

Sobriety is the disease, we're the cure.

Infusing liqueurs at home with inspiring and seasonal ingredients