God Jul!  For those of you who do not speak Swedish (like me – even though I’m Swedish-American), it means Merry Christmas.  Pertaining to the approach of Christmas, not “the holiday season” since it does not have anything to do with Thanksgiving or New Years, this drink is like drinking Christmas Spirit.  However, this is how I see it, or from my perspective growing up with one of many traditions.  We called it “grog” in pronunciation, even though it should have been pronounced “wassail.”  It was my grandmother’s recipe, and meant to be non-alcoholic – no wine, no brandy, and certainly no rum.  Yet rum made its way in, only after it was done brewing all day, and resting through the night to be ready to drink the next day.  Whether a Christmas party, or merely to drink a bit of happiness into your life, we’d put the wonderment into a big, coffee maker with a spigot to warm it back up, and a bottle of rum nearby for the adults.  As a boy I never could see any reason to change what was perfect.

What we made was wassail, a hot mulled cider (Old English wæs hæl, literally ‘be you healthy’ – an ancient southern English ritual intended to ensure a plentiful cider apple harvest for the next year.  The term wassail was meant for both drink and toasting).  Regardless, we didn’t call it that.  We called it grog.  When looking up various recipes for grog, or glögg in Swedish, I quickly found out several missing ingredients.

Glögg, pronounced somewhat like glooog (roughly translated: “glow”), is a sweet, high-octane, mulled wine.  According to the Wine & Spirits Museum in Stockholm, King Gustav I of Sweden was fond of a drink made from German wine, sugar, honey, cinnamon, ginger, cardamom and cloves. It was later named “glödgad vin” in 1609, which meant “glowing-hot wine.” The word glögg is a shortened form that first appeared in print in 1870.

There are several recipes I am fond of, all which include various fruits, either sweet red wine or port, or both, and all with fortifying spirits.  Here’s a Swedish glögg recipe:

Bind up cinnamon, cardamom, cloves and lime rind in cheesecloth.  Bring all ingredients, except alcohol and wine, to near boil (do not boil) and simmer for at least one hour, preferably 3 hours.  Remove bound up spice packet.  Add remaining ingredients only minutes before serving, reheating to near boil (again, do not boil).  Serve in heatproof glass cups (so you can see inside – this Christmas gift comes with see-through wrappings), adding a small helping of fruit and nuts to each glass, and a teaspoon to eat by.  Garnish either with an orange peal in the drink, or an orange slice on the rim of the glass.

I know that sounds like a lot of ingredients.  But the idea is richness, deep thought-provoking richness, the kind your most precious memories from Christmas past will conjure.  Also, if you would prefer, I’ve heard of substituting Aquavit (or Akvavit) for the brandy, but not for this precise recipe  This is where I haven’t experimented enough to make this call – maybe if Aquavit is added, maybe the cardamom will seem too powerful.  Sorry for not knowing for sure.

Even though I’m talking about glögg, I’m writing this to show the grog recipe I grew up with, regardless if it’s really wassail.  It’s a simple recipe, easy to make, and so happy and bright with flavor.  You could even use it as an ingredient if making a mulled wine.  I am very proud of this drink, and so glad my parents shared this recipe with me.

Make hot tea by steeping for 5 to 7 minutes.  Meanwhile, bring water to boil and dissolve sugar completely within to make a simple syrup.  Add cloves and cinnamon to tea, bring to a boil and simmer for 10 minutes.  Add cider, orange juice, syrup, grapefruit juice, and cranberry juice.  Bring to boiling point, but do not boil.  Simmer for a few hours.  If you don’t have time, just cover and let it sit all day.  Either way, let it stand overnight to marry the flavors.  Serve hot (but do not boil).  If you’re in the mood, add a splash (or more) of amber rum.  Silver rums feel a little too rough, and spiced rums think they are in charge.  I first thought dark rums would be ideal, instead learning they kind of clash as well.  A list of rums that work:  Appleton, Matusalem, Mount Gay, El Dorado, Pusser’s, and Bacardi.  Due to how more mild it is to any other, Gosling’s is the only dark rum capable for this recipe.  Finally, garnish with a slice of orange with a number of whole cloves poked into the skin, thanks to my loving parents for sending my wife and I a box of delicious Florida oranges.

Merry Christmas to all who read this.  Astonished to see so many people from so many places visit this website, I hope I can be of any help, even if it just means a suggested recipe for an option of what to make with certain flavors.  Thank you one an all.  And for those who do not celebrate Christmas, I wish you a Happy New Year.  Be safe.

The Mai Tai is not a red drink.  I repeat, if you order a Mai Tai in a restaurant or bar, and if they bring you something red, it is not a Mai Tai.  It is the color of rum, luxuriant amber.  All other ingredients do not change the color, only slightly clouding it.

Tiara (from http://www.amountainofcrushedice.com) said it well:

“A Mai Tai is a Mai Tai and a twist of it is another drink – like a cousin and a cousin needs a slightly different name. When making a twist, stick to the original recipe as your foundation and don`t change it so much that it´s not based on a Mai Tai anymore.  In my opinion you can NOT add amaretto, grenadine, pineapple or/and orange juice and call it a Mai Tai – call them something + Mai Tai or give the drink an entirely new name.”

Some believe a Mai Tai can only have a lime shell and mint for garnish, making a pineapple spear a savage practice, or at least offensive (As you see in the images below I haven’t garnished with mint for either of these because my mint isn’t tall enough yet in my garden.  But this hot weather will change that soon enough).  However I am not going to get into any argument.  That’s why I’m offering two Mai Tai recipes.  For those of you who are not familiar with Mai Tais, or have not read anything about them, or talked with someone who feels passionately about the topic of Mai Tai authenticity, you may not be aware of the family feud going on right under your nose, what might be considered the most controversially argued of all cocktail recipes.  Some feel strongly about who invented the drink.  On the other hand, there are others who just want to get along, sharing what they know, and only arguing in a constructive style of precise measurements in attempts to find the perfect work of art.  Authenticity is important.  It is like history.  Truth, it seems, can also shine as a spectrum, not necessarily rendered less authentic by examining the different levels, but what learned colors offer the purest form of light.  Opinion is not a truth.  If a person learns all there is about the facts, yet still feels one drink is better than the other, that is their opinion.  It can be disturbing for two groups of people to identify an object by a name, when that object is not one, but two.  So if both groups thinks their object is the only way life can exist, and both feel their voice is stronger, the shouting contest gets louder.

I admit, I feel strongly about the Mai Tai.  Regardless, are there different ways to make it?  Yes:  Two ways.  I could even suppose there are as many ways to make the Mai Tai as there are ingredients – just as long as you respect the originals.

Don the Beachcomber did not like his Mai Tai, at least not enough to keep it on the menu in his restaurants.  Also, Donn’s Mai Tai doesn’t taste anything like Vic’s.  Even though the two men’s drinks share a name, it’s the difference in ingredients that set them apart (obviously), and uniquely lift each to fame.  I’m not going to say what key ingredients make the difference, since every flavor does this.  But for me the major difference is between falernum and orgeat, both profiling their drink’s individualities, as well as how a small amount provides so much extravagance.  As far as rum, in Donn’s, either mixing Appleton Estate & Pusser’s, or instead of the navy-style rum – using demerara rum.  Either way, mixing these two kinds of rums offers great character.  One last thing about Donn’s Mai Tai, I add quarter ounce of simple syrup as a preference.

Trader Vic‘s original was made with 17 year old Wray & Nephew rum, which a while back stopped production, and in effect caused a regeneration of the recipe.  The outcome was joining two specific flavors to call back what the extinct Wray & Nephew conjured – Jamaican and Martinique rums.  The Jamaican style of rum mixed with the agricole style causes a new flavor in its own, congratulating each other’s strengths.  Kind of radical in my opinion, but with the curaçao (koor-uh-sou) and orgeat (ȯr-zhä{t} – I’ve heard with and without the “t” sound…if anyone knows for sure, please let me know) smoothing them with sweetness, and the lime countering in favor of the rum – the distinct balance proves how worthy this drink deserves its reputation. 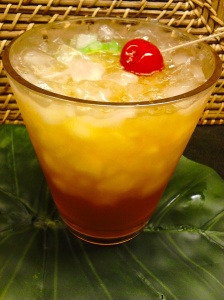 Bottom line, why choose when you can have both?  And if you do like one better, give the other a chance, if not to win your affection, then at least your respect.  After all, both drinks are so refreshing.  Cheers.

It's all about our ridiculous love of booze

Sobriety is the disease, we're the cure.

Infusing liqueurs at home with inspiring and seasonal ingredients